Bifox Limited (“Bifox”), incorporated in Australia, is an unlisted public company in the mining sector, developing a portfolio of phosphate exploration and exploitation projects in Chile. Its main assets are the Bahia Inglesa mining licenses and phosphate production plant that were introduced by Lara under a Strategic Alliance agreement and Lara currently holds a roughly 14% equity interest in Bifox.

Since settling environmental infractions and fines, inherited from the vendors, at the start of 2020 (see Company news release of Feb 7, 2020), Bifox Ltd. has been working to reinstate its permits and resume operations. Production was delayed due to the Covid-19 restrictions imposed in March 2020, but site activities resumed in June and new operating permits issued in late July and early August. Production and sales of direct application phosphate (containing an average 22% P2O5) into the Chilean market have now resumed and Bifox expects to gradually increase production over the next three to six months as the marketing and sales team generates new orders.

The Bahia Inglesa deposit, which lies only 8km from the port of Caldera, is approximately 800 km north of Santiago. Readily available mining industry labour and services are available from Copiapó 77km to the southeast, on the adjacent Pan American Highway. Copiapó has an airport with regular commercial air services from Santiago. 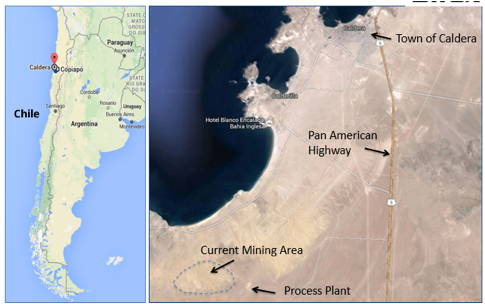 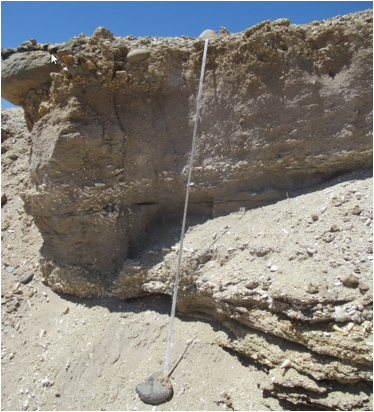 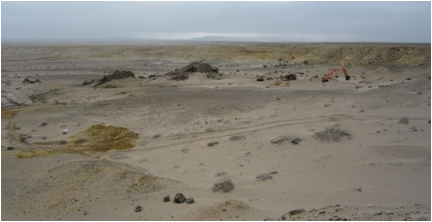 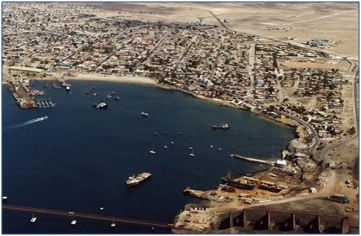 Aerial view of Port of Caldera and Township 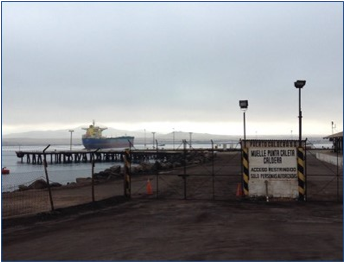 Infrastructure at the Port of Caldera

Pan American Highway: South from Caldera towards Copiapó, adjacent to the project area.

As the Bifox production plant is located near to Caldera it is on the town power and water grids. The port of Caldera currently handles bulk exports of copper and iron ore in Handymax vessels with capacity up to 40,000t. 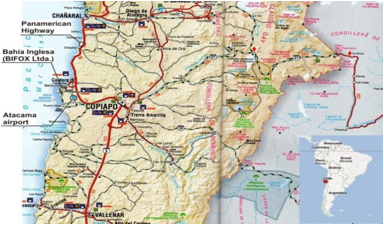 Geographic location of Caldera and the Bifox Bahia Inglesa project

Details of the Mining and Exploration tenements

The Bahia Inglesa phosphate deposit is in the Atacama Desert with minimal vegetation coverage. The license area is roughly a rectangular plot approximately 20km N-S by 11km E-W as shown below. 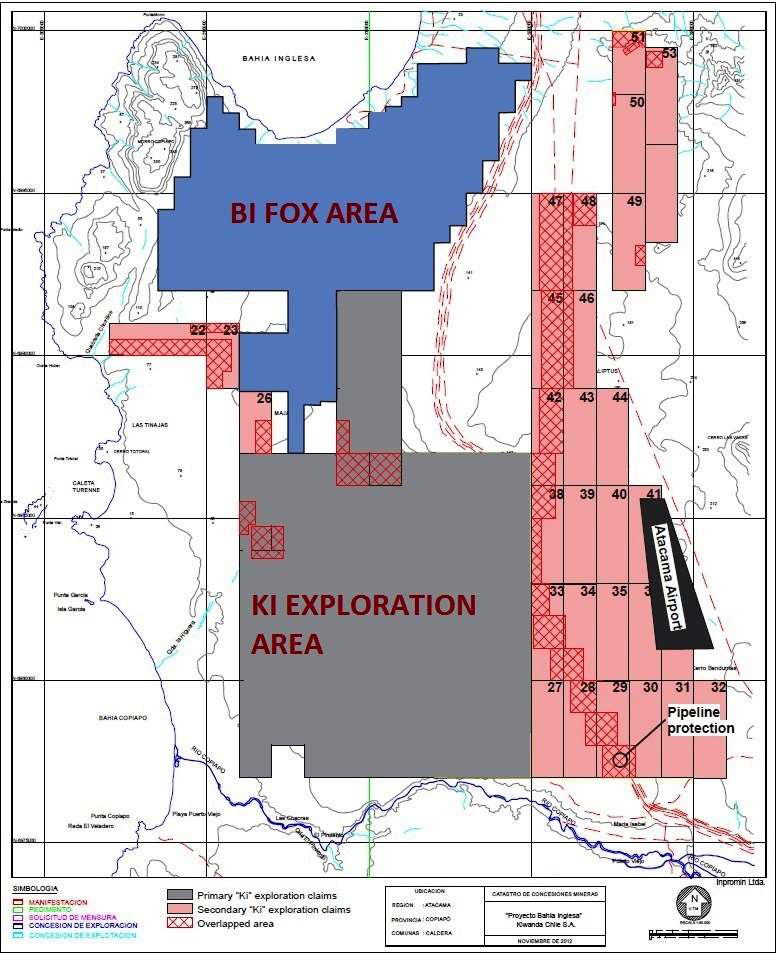 Geology of the Bifox project 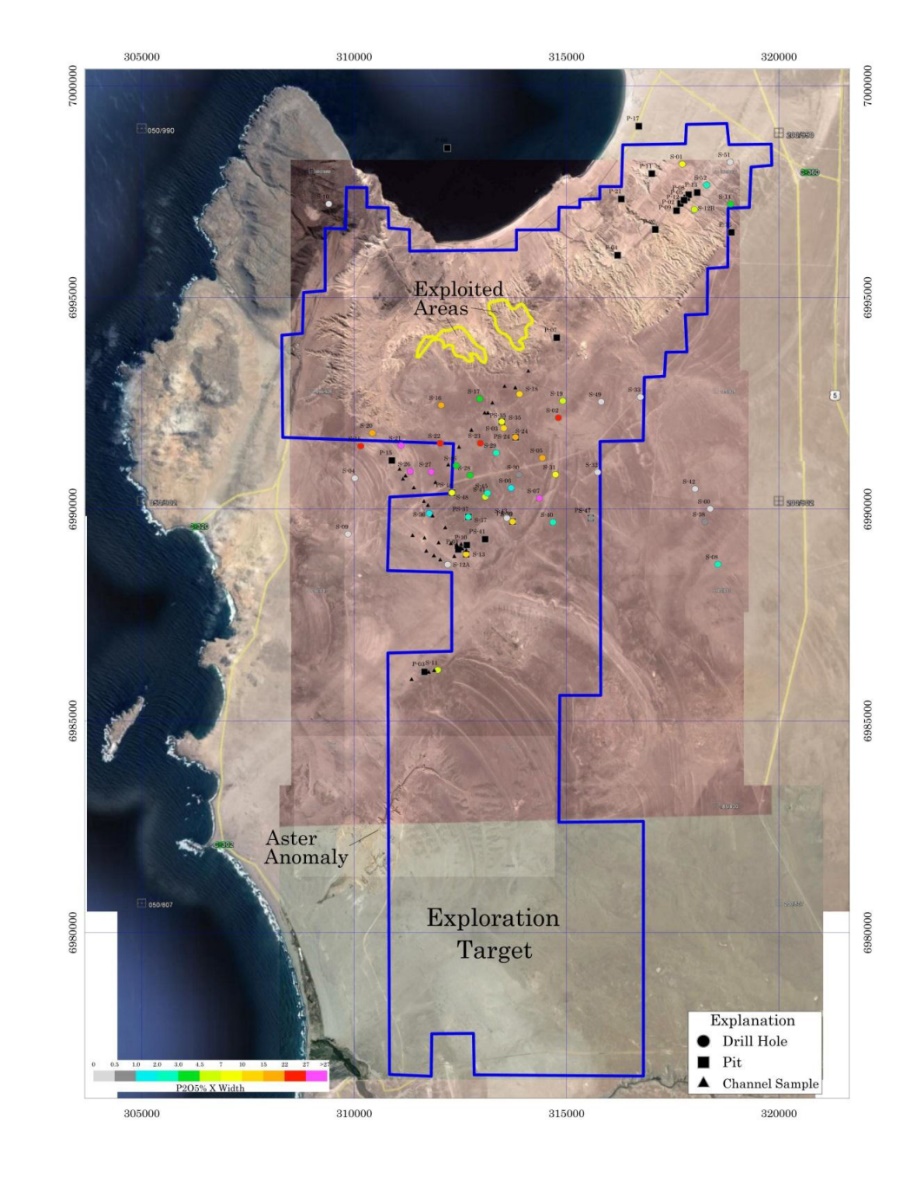 Google image with the limits of the Bifox Project

The Bahia Inglesa phosphate deposits are typical of sedimentary hosted phosphate deposits worldwide. The primary mechanism for the formation of these deposits is the warming of cold phosphate-rich upwelled deep ocean waters within shallow marine environments. The solubility of phosphate in cold seawater is about 0.3 ppm whereas in warm saline water the solubility decreases to <0.05 ppm, so phosphate precipitates as the seawater warms. Important factors controlling mineralization are the presence and scale of upwelling, current directions and coastal and sea floor geomorphology.

An important mechanism in producing economic deposits is the mechanical upgrading of the precipitated phosphate by current and wave action. The phosphate precipitates form layers that break into fragments (pellets) which are hard, heavy and possess a low aspect ratio relative to calcareous sand grains. Wave and current action is thought to winnow the finer material and concentrate the phosphate pellets.

Another factor contributing to the formation of economic phosphate deposits is the development of sea floor irregularities due to active structures. For example, down dropping across a fault or rocky outcrop may focus winnowing ocean currents and create a trap where phosphate pellets can accumulate. 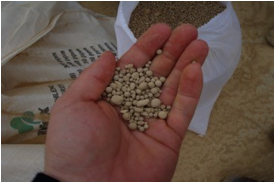 The Bahia Inglesa phosphate deposits are hosted in the Miocene to Pliocene Bahia Inglesa formation. The Bahia Inglesa formation is comprised of up to 42m of siltstones, fine sands, shelly coquinas, pebble beds, and phosphatites, and represents a near shore shallow marine setting. It overlies crystalline basement composed of Palaeozoic metamorphic rocks and Cretaceous granitoids. It is partially covered in some localities by a thin cover of Pleistocene clastic and chemical sediments.

Phosphate mineralization occurs in the upper part of the Bahia Inglesa formation in 3 different stratigraphic locations. The Lower Phosphate Manto is an extensive unit 0.1 to 0.4 meters thick and is located above a sandy unit within the lower part of a siltstone unit. One to 2 meters above the Lower Phosphate Manto is the Main Manto which is up to 2 meters thick and consists of phosphate pebble conglomerate. The third type of mineralization is described as fluvial deposits which are up to 7 meters thick and consist of conglomeratic units interbedded with phosphatic sandstones. Clasts in the conglomerates are described as consisting of 70% phosphorite and 30% basement lithologies. 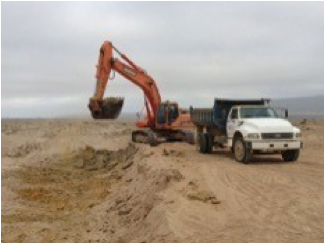 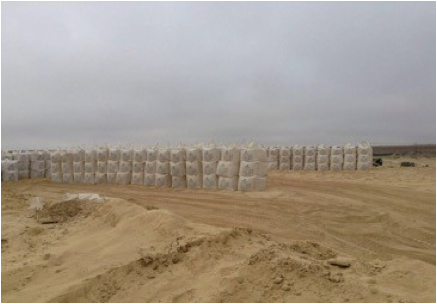 CORFO/CCHEN calculated resources at the time, but these are not compliant with JORC or NI43-101 mineral reporting codes. Since the CORFO/CCHEN exploration work some of the near surface phosphate beds have been partially exploited in some areas.

Bifox has processing plant on site which was refurbished an upgraded with a capacity to produce up to 20,000 t/y of phosphate rock for direct application usage at > 20% P2O5. Below is shown current production flowchart: 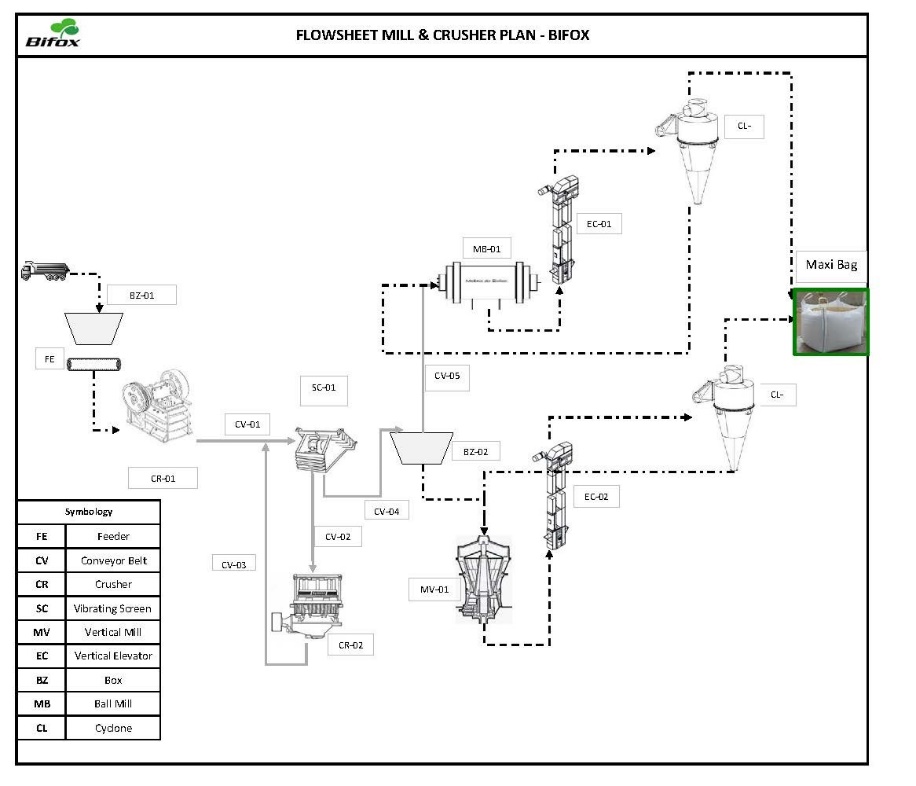 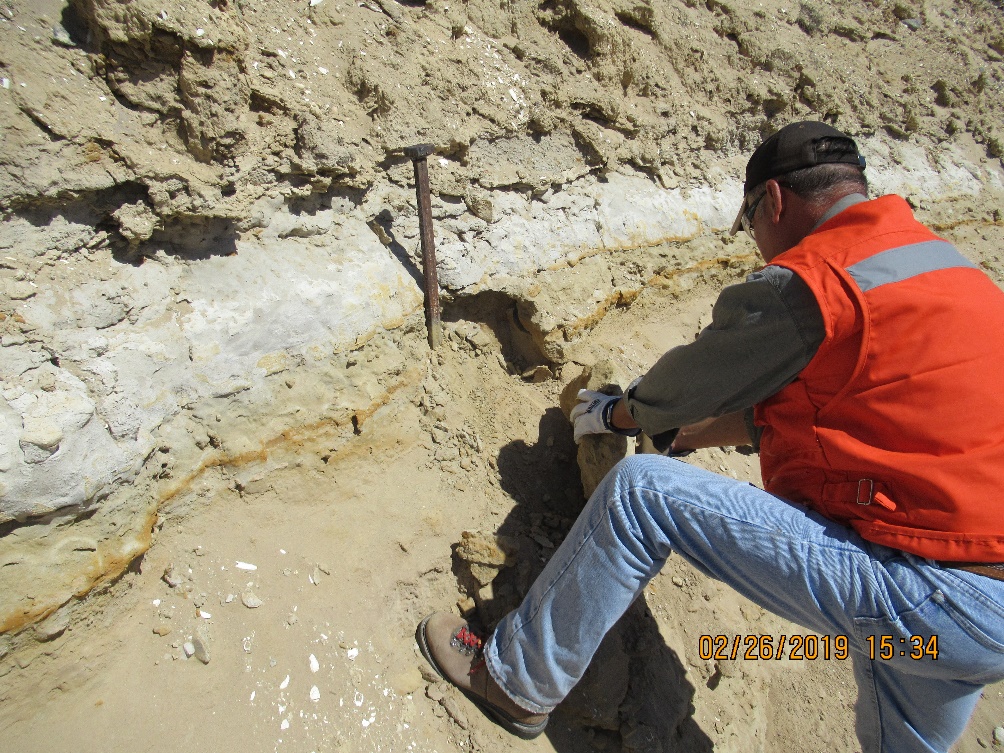 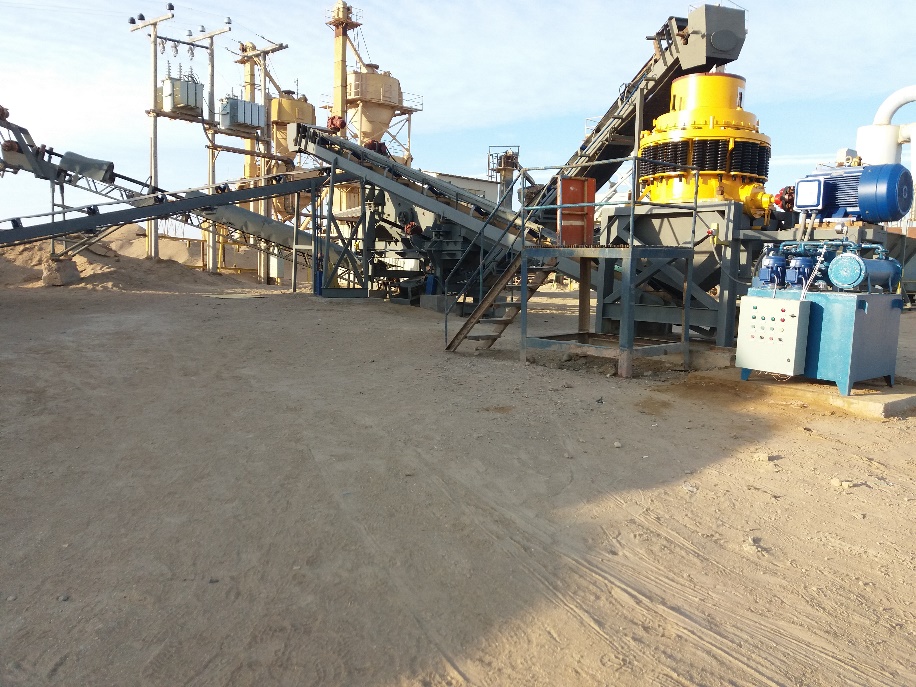 Partial view of the production plant 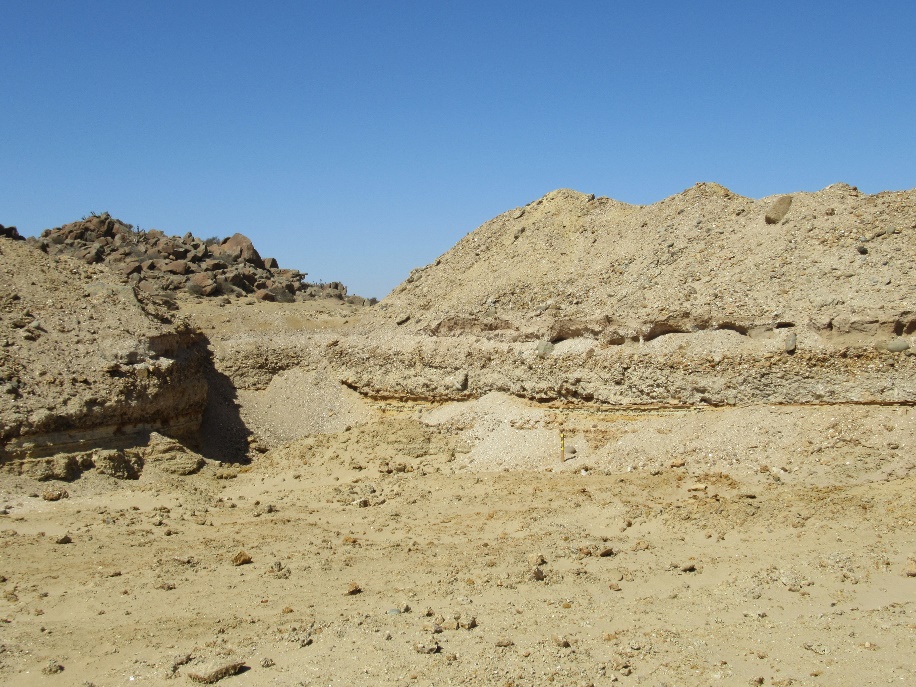 Partial view of one of the phosphate mining pits